4 Best Cities in Canada for Chinese Canadians to Live In

Each year, the U.S. News & World Report conducts a global "Best Countries in the World" survey of 75 different countries and regions, with approximately 20,000 citizens from around the world interviewed. Canada has ranked top in quality of life almost every year, and this year it took first place in the overall list of the world's best countries.

Canada has always been one of the most popular countries for Chinese immigrants. According to Canada's demographic analysis statistics, there are nearly 2 million Chinese in Canada in a total population of 37 million, reaching 5%.

These large cities with concentrated populations and developed economies are also the most popular places for immigrants.

The 2016 demographic data released by Canada Statistics show 700,000 ethnic Chinese in Toronto, accounting for 12% of Toronto's total population, and about 500,000 in Vancouver, which has a Chinese population of 21%. The numbers in Vancouver might not be as high as Toronto's. Still, including the international students, accompanying parents, work visas and visiting relatives, the number most likely reaches a total of 600,000.

Montreal and Calgary are both cities in the low 100,000s. Edmonton, Ottawa and Winnipeg are also Chinese populated cities.

These seven cities account for nearly 90% of all Chinese in Canada, and Toronto and Vancouver account for 68% of the country's total, indicating an extraordinary concentration of Chinese.

Let's take a look at the top four cities in Canada where Chinese Canadians prefer to live. 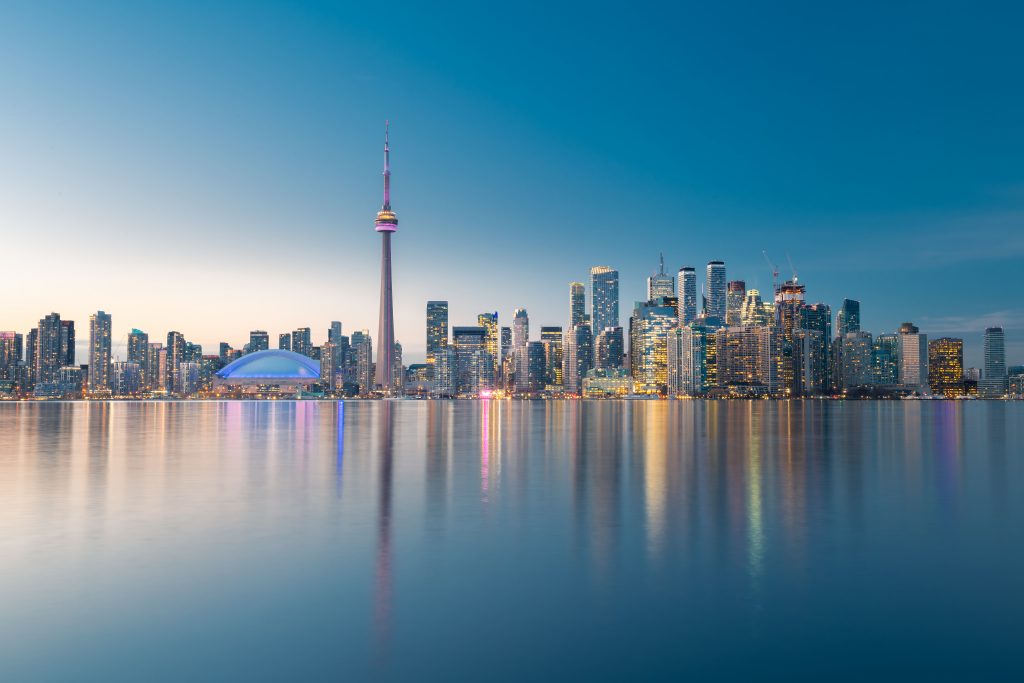 Toronto, the Heart of Canadian Manufacturing

Toronto, the capital of Ontario, is Canada's largest city and the cultural and economic birthplace of Canada, not to mention the transportation hub and heart of the country's manufacturing industry. Across the river from Toronto is New York and the world-famous Niagara Falls, just 100 kilometres from Toronto.

Toronto is an Indian Huron word meaning "meeting place". Toronto has a reputation as the most diverse city in the world, embracing immigrants from more than 100 countries, with people of all colours walking the streets, and a variety of social, food, entertainment, art, shopping and recreational features can be seen, showcasing the diversity of cultures.

The headquarters of major Canadian banks, such as Royal Bank, Imperial Bank and Bank of Montreal, are all located here. 90% of foreign banks have branches in Toronto, and the Toronto Stock Exchange is the third-largest exchange in North America in terms of the trading volume.

In addition, the nearby famous Niagara Falls attracts about 30 million tourists every year. Toronto has a large immigrant population, with 48% of its residents being immigrants worldwide. It is also known as a Chinese colony in North America, with about 400,000 Chinese.

What's the climate in Toronto?

Toronto has four distinct seasons and a mild climate. Toronto has comfortable summers; freezing, dry and windy winters; and partial cloudiness throughout the year. Throughout the year, temperatures usually vary between -8°C and 25°C, rarely falling below -17°C or above 30°C.

Toronto is a young and vibrant city full of opportunities and challenges, so if you are ready to make your mark in Canada, Toronto is a great city to immigrate to. 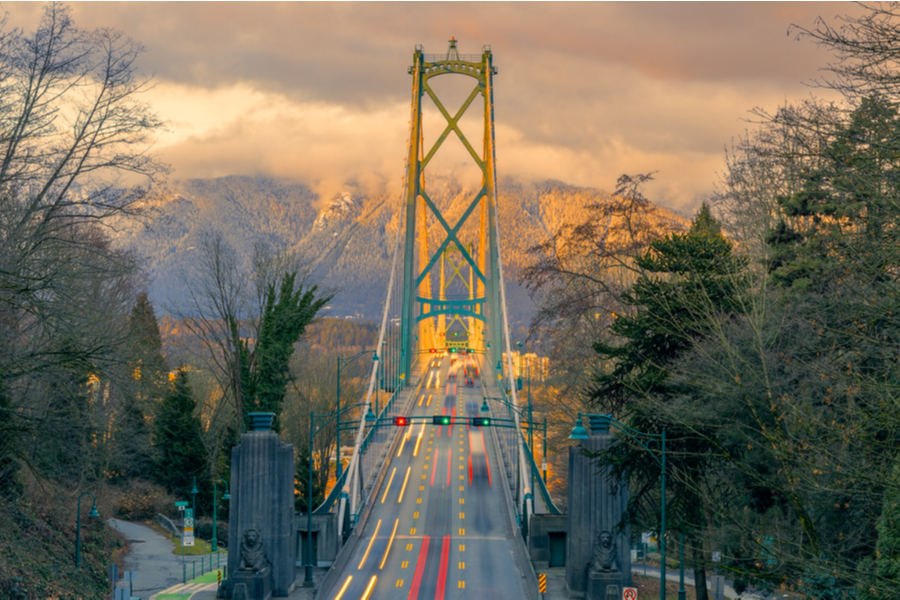 Vancouver, where modern urban civilization and nature meet in harmony

Vancouver, Canada's third-largest city, is known as the "Gateway to the Pacific". Surrounded by water on almost all sides, it is the largest natural harbour on the Pacific coast of North America. Vancouver is a beautiful city that brings together modern urban civilization and natural beauty harmoniously that has enchanted many people who have visited the city.

It has many large parks, modern buildings, charming lakeside paths, and perfectly preserved traditional architecture. Each area is a city similar to a district in a Chinese city, and many small cities make up the "City of Vancouver".

Each municipality has its own centre where people can live and do their business within the municipality. The cities are separated by light rail (SKYTRAIN) or buses and are separated from each other by green areas or large parking lots or warehouses.

These separated gardens and green spaces take up almost 80% of Vancouver's area, so it's no wonder that it has been named the best city for human habitation by the United Nations many times.

What's the climate in Vancouver?

Vancouver's climate is influenced by the warmth of the North Pacific Ocean and the cold, dry air currents from the American continent that are blocked by the rolling Rocky Mountains to the east, making it the warmest city in Canada in winter.

With an average home price of just over $1 million and a Chinese population of 2.3 million, Vancouver is a rich man's paradise. Montreal, a city that combines both.

What do you get when you combine the vivacity of North America with the relaxation of European life, a beautiful village that has evolved over 350 years? Or a metropolis with high technology and high quality of life?

From the local festivals, amazing cuisine, and traditional nightlife, Montreal definitely offers the most joy and the best entertainment.

Known as the "Paris of North America", Montreal is Canada's financial and commercial centre and second-largest city. The architecture is modern yet nostalgic, with elegant historic structures subtly paired with a modern 21st-century look.

The visual arts are an important element here; you can see many masterpieces at the Montreal Museum of Fine Arts, the Museum of Modern Art, and hundreds of leading local galleries.

Montreal is also known as the "City of Spires" and has more Gothic churches than even the ancient city of Rome, with one to be found every block or two. Indeed, Montreal's international reputation is characterized by creating the ultimate perfection, not only in traditional art but also in cutting-edge technology, multimedia, music and film.

Perhaps because of their Latin roots, the passionate people of Montreal brings this feeling to the rest of the world. If you visit Montreal, you will also feel the passion of the city - warm, relaxing, charming and full of happiness.

What's the climate in Montreal?

Montreal is at the crossroads of several climate zones, so the weather is varied.

Although the weather is rarely hot, summer temperatures can reach over 30 degrees and are one of Montreal's most popular tourist seasons. Calgary, popular nicknames "Cowtown and Stampede City", is the fourth largest city in Canada and is located in the Rocky Mountains of southern Alberta, Canada, covering an area of 789.9 square kilometres at an elevation of about 1048 meters.

The word Calgary means "clear, flowing water", which shows how clean and beautiful the city is. Calgary has also lived up to its reputation and has been named the "cleanest city in the world" many times. This quality of the living environment is an important reason why many Chinese families choose to settle here.

Did you know that in 1988, the 15th Winter Olympic Games were held here? Calgary has also been ranked the 5th most livable city in the world by The Economist from 2012-2014! Calgary also has a well-developed film and entertainment industry. Many popular movies and TV shows have been set in Calgary, such as Brokeback Mountain, Inception, Wilderness Hunter, Star Trek, etc.

What's the climate in Calgary?

The weather is very changeable, and there is even a saying in the city that you will "experience all four seasons in a day". Calgary also has a higher chance of hail in the summer.

Calgary has four distinct seasons: a long spring, fall and winter, and a short summer, often with snowy days in early May. The city's coldest months are generally concentrated in February and March. Cal City is usually sunny, with the highest average sunshine hours annually in the country.

Most overseas Chinese who move to Canada choose Vancouver and Toronto, making these two areas the most densely populated by Chinese Canadians. In particular, Chinatown in Vancouver is the second-largest Chinatown in North America because of its size, second only to San Francisco's Chinatown.

This has created a spectacle of developing a Chinese city in mainland North America, with Chinese restaurants, shopping malls and schools lined up, Chinese plaques all over the streets, and Chinese dialects in your ears. You may even feel like you're in the country itself!

Many artists are Chinese Canadians, such as Cai Zhuoyan, Peng Yuyan, Zhao Yuting, and Dou Xia.

Interested to invest in the 4 best cities in Canada for the Chinese?

Drop a message down below, and our professional team of agents will reach out to guide you soon.

Which country should you invest in after the pandemic?

Why the UK remained popular for investors during the pandemic?