USAHaving been blessed to be located in the tropics, the only state island of the United States of America that is found outside North America, Hawaii is considered a pacific paradise. With so many magnificent locations, it is like herding cats and tough to choose. Nevertheless, let’s explore the 9 best places in Hawaii to explore, taking into consideration the opinions of experienced travelers, when you visit Hawaii in real life. Hanauma Bay is one of Oahu’s, the third-largest of the Hawaiian Islands, top tourist destination. Before the global Coronavirus pandemic appeared, 3000 people used to visit Hanauma Bay every day. This place is best known for snorkeling and ocean wildlife while also offering the opportunity to witness exciting things that happen underwater. Tourists come and enjoy the ocean paradise as the waters are amazingly calm.

This is a worthy destination while visiting Hawaii. History enthusiasts might know the significance Pearl Harbor of Oahu bears due to the devastating attacks by the Japanese upon the United States in 1941. More than 2,000 sailors and Marines that died in the attack got their final resting place here. Today, this area is a memorial site and tourists visit to pay their respect. Over 2 million international visitors along with the local ones have been visiting the site of Arizona Memorial every year since World War II happened in America. Kauai, also called by its nickname "the Garden Isle", is a part of the Hawaiian archipelago located in the Central Pacific. This island is breathtaking to explore due to its dramatic cliffs and pinnacles along with the lush green landscape. Tourists get awestruck while exploring this site. The beauty and magnificence of the Garden Isle is due to the tropical rain forest covering much of its surface. The North Shore of Oahu geographically is discovered in the area between West Oahu’s Ka’ena Point and East Oahu’s Kahuku Point. This site is famous amongst the tourists during winter. Tourists get to witness an unusual and flamboyant appearance of waves during this season. Besides that, people can have an incredible surfing experience here. The special spots of this location include Sunset Beach, Waimea Bay, and Ehukai Beach.

Check out: 5 inspiring places you must visit in Thailand for first-time travellers. Located at Hawaii’s South Oahu, Waikiki beach is another tourist-friendly destination, where the name Waikiki carries a historic significance. Waikiki means ‘spouting waters’, and refers to the freshwater rivers that once flowed towards the ocean. Today, high-rise hotels line the shore. It has a high-spirited neighborhood known for its popular surf beach as well. Ahu'ena Heiau at Kamakahonu is a temple of peace and prosperity that is located on the grounds of the Courtyard King Kamehameha's Kona Beach. While visiting this site people get to experience ancient vibes as it has a historical background. This temple was originally built in the 1400s, and initially was served as a spiritual center. 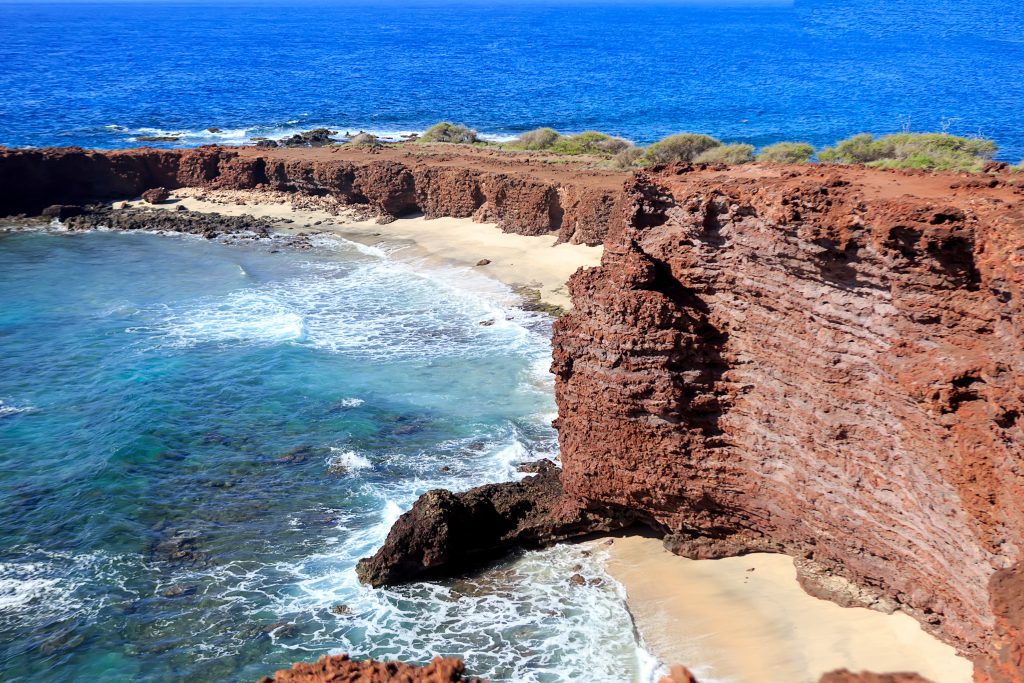 Lanai is one of the many islands in Hawaii’s Maui, comprising the U.S. state of Hawaii in the Pacific Ocean. This island is breathtakingly gorgeous and a dream for any kind of explorer. It is also known as the ‘Pineapple Isle’. Lanai gained this title from becoming one of the world’s foremost pineapple-growing locations in history. Grand Canyon National Park, also known as the ‘Grand Canyon of the Pacific’ in Arizona, is one of the most peaceful places to visit in Hawaii. It is large, beautiful, and home to the immense Grand Canyons. It is a popular area for hiking as well, where the canyon is about 10 miles long and 3,000 feet deep. In this site, Lipan Point, with wide views of the canyon, is also a popular point as tourist can watch the mesmerizing view during sunrise and sunset. Two of the world's most active volcanoes, Kilauea and Maunaloa, can be discovered at Hawaii Island. Those who have not glanced volcanoes in real life before and want to grab the chance to see it, there is no better option for than the volcanoes in Hawaii. There are plethoras of hiking trails throughout the park, as well as lava flows. It is guaranteed for tourists to visit there to have a lifetime of an experience.

Since the Coronavirus pandemic has captivated the world, there have been many rules and regulations set for international travel. As per the new rules, mandatory 14-day quarantine is applicable for any person arriving in Kauai, Hawaii Island or Maui County, and traveling between these islands. The period of self-quarantine will begin immediately upon arrival. Hence, it is better to do research about the place before you venture into a new journey.

Basking in the sun with scenic views in the background, Hawaii is indeed a beautiful place to be at. With it being one of the top destinations for tourists to visit, the economy is flourishing and investors are eyeing the properties. If you're interested or have any inquiries about Hawaii real estate, feel free to reach out to us by filling in the form below!

5 nutrition advices during the Covid-19 pandemic