A report about student property investments in the United Kingdom

The value of student accommodation in the UK in 2016 was approximately 3.1 billion, 60% of the total in 2015. 2016 transaction volume increased from overall in line with expected levels, above the recent five-year average and the second-highest level on record. As the U.S. student housing market becomes increasingly saturated, many overseas investors are setting their sights on the UK, the world's second-largest student housing destination.

This unified management model has been welcomed by the students. Compared to school dormitories, student apartments are in better condition and have newer and more complete facilities. Compared to renting out a room, you don't have to worry about looking and choosing a room, and all the trivial costs like water, electricity and internet are included in the rental. The common areas are cleaned by staff, and the management company repairs broken light bulbs and clogged drains, saving time and effort.

In 2016, single apartments remained the most popular type of student accommodation, and while supply was up 24% year-on-year, it still couldn't be meeting market demand. Compared to 2015's 41% growth rate of supply, 2016 was only half, which is because developers underestimated market demand and the fear of oversupply has affected rents, and high-cost pressures have also cut enthusiasm for development.

University student numbers have climbed year on year, with as many as 1.7 million full-time students now enrolled, a 0.4% increase on last year. In the 2016/2017 academic year, there were 568,000 dedicated beds available for students, up 5.4% on the previous year. The average rent for student accommodation in the UK increased by 2.7% in 2016, compared to last year.

The number of UCAS applications (first-year students) increased by 2.7% year-on-year in the 2015/2016 academic year. Since the abolition of the admissions limit, which has led to more choice for colleges and students, quality universities have become quality students' gathering places. Cushman & Wakefield notes that this has also increased competition between universities, prompting them to improve their teaching services, and besides, student food and accommodation are also key to the competition. Of course, the issue of future employment is an even more important factor in choosing a school. 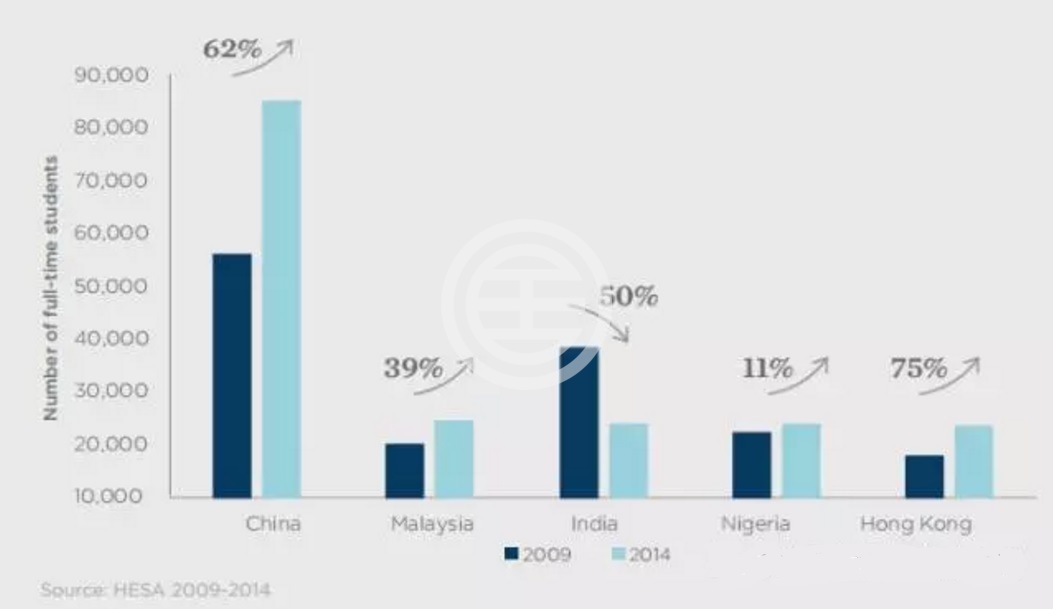 If the number of UK students choosing to live on campus increases, and the number of non-EU overseas students continues to grow, student accommodation will be even tighter in the coming years. Due to financial constraints, some schools are unable to improve their campus environment, forcing them to work with outside organizations to improve infrastructure such as student housing.

The trend of schools joining hands with outside agencies is becoming a trend that will greatly improve the campus environment and yield some benefits. Depending on the region in which they are located, as the average rent increase for student accommodation in the UK varies, there are some areas where rent increases have been insignificant or even zero, although there has been a positive trend in well-located areas.

Overall, however, the number of privately-run student flats is still smaller than the number of halls of residence provided by schools. And with the number of students, especially international students, increasing year on year, the demand for student accommodation continues unabated. In the first half of this academic year, the average rent increase for student accommodation across the UK was 1.59%. Compared to 1.55% in London, in the five regions of Liverpool, Bristol, Cardiff, Newcastle and Edinburgh, the increase was 3-4%.

According to data released by Cushman & Wakefield, the student: bed ratio has risen from 2.1 to 2.3. Although the supply of apartments and beds is increasing, it is still not sufficient to meet the overall demand. Also, developers will need to find another way to address supply and demand constraints. HMOs
For developers, not only do they have to factor in the financial pressures on students when building student housing, but also the cost of construction, which rises as land use patterns become more competitive.
There are many HMO halls of residence available in the market today, as a new alternative to student housing, which can provide students with more choices and ease the pressure of supply and demand in the market, as well as secure accommodation at an affordable price.

Investment markets
2015 was a record year for investment in student accommodation in the UK, with a turnover of 5.1 billion, around 82% of the market share belonging to the investment portfolio, and with the majority of investment coming from overseas.

The value of student accommodation in the UK in 2016 was approximately 3.1 billion, 60% of the total in 2015. 2016 transaction volume increased from overall in line with expected levels, above the recent five-year average and the second-highest level on record.

It is the philosophy of UK developers to develop as much property as there is a market for, and government regulation is more sophisticated. Just because student accommodation is less expensive, more profitable, more stable and less stressful to manage than other investment properties does not mean that it is the best and no downside to investing.

Rental growth
Between 2013 and 2015, the return on investment in all types of investment declined by 0.5% to 1%. In the year 2016, there were no significant fluctuations in ROI across the direct lettings sector. The total number of transactions in student accommodation to November 2016 was 42,206 beds, with the average price per bed rising from 99,750 due to a significant decline in investment activity in London It fell to 73,450.
Possibly influenced by both falling bond yields and investment risk aversion, the annuity sector has compressed further, with investors Investment yields on the prime investments pursued have also compressed by at least 25 basis points, falling to between 3.75% and 4.0%. For example, Aviva's 76m investment in Godiva Place in Winchester. Coventry and Queens Road Student Village was acquired by Legal & General at 31m.
The Cushman & Wakefield UK student accommodation tracker indicates the average rent for student accommodation in the UK, Year-on-year growth was 2.7%. It can be seen that the growth in average rents strongly supported the record yield levels set in 2015. Development
The number of student-only beds for the 2016/2017 academic year was 568,000, an increase of 5.4% over the previous year, which is the highest record in Cushman & Wakefield UK student accommodation tracker.
Some investors are sceptical about the student apartments under construction, land use rights, increased planning responsibilities, and construction and operating costs have squeezed profit margins.
In the first half of 2016, investors continued to seek development financing opportunities in pursuit of higher investment returns. In the second half of the year, demand for development finance slowed due to the impact of Brexit. However, there was also a greater gap in student demand for apartments.

Outlook 2017
With over 1 billion of student accommodation projects currently for sale, 2017 could be a year of high turnover. Buying back refurbished halls of residence by acquiring subordinated stock is seen as a more viable option by developers due to the high cost of land and construction.
The student HMO market has so far been dominated by individual investors and has recently been enlivened by organisations backing HMO operators, the HMO market can offer a cheaper alternative to student-only apartments and there may be more investors entering this market in the future.
In addition to existing investors and operators, there are overseas investors whose unmet investment needs will undoubtedly drive sales and consolidation in 2017.
Market sentiment suggests that there is also a need to reformulate the risk premium base for developments project, which will aid investor choice and lead to the construction of more student accommodations in the United Kingdom to meet the demand for student accommodation.

The Columns of Zhang Si Qi，founder of Celestial Globe Ltd
Feel free to email us at editorial@juwai.com if you have any question.
This is an exclusive article from Juwai.com.

This article is contributed by Juwai Columnist, Zhang Si Qi.

How to make your small home look BIG