How much do houses cost in Australia? 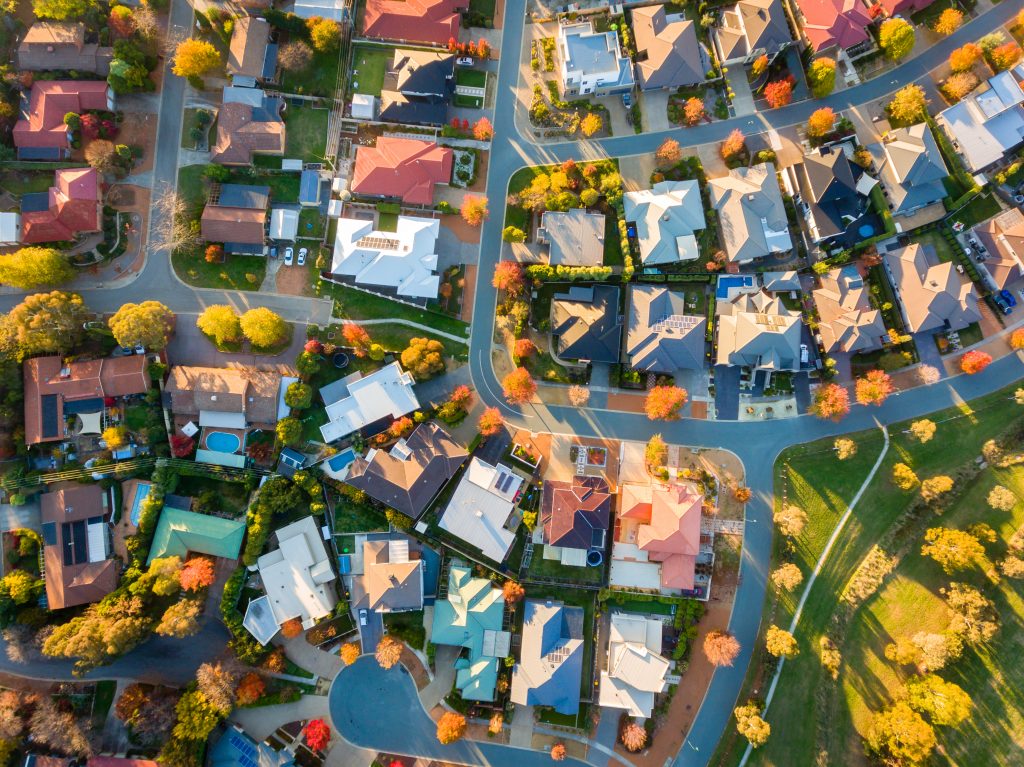 The typical Australian house is detached and has a garden. Apartments and row houses are more common near the cities, but detached houses still predominate in most areas.

When you take wages into account, Australia’s house prices are high compared to most other countries. This is likely to result from the desirable lifestyle and climate Australia offers. The composition of homes being built in Australia has changed substantially over the past decade. The number of houses and apartments constructed each year has tripled since 2009, and in 2020, apartments accounted for around one-third of residential building approvals (Graph 1). In contrast, the volume of detached houses built last year was roughly in line with the average over the past three decades. The shift towards higher-density housing brings Australia more into line with international norms because Australia's existing housing stock is heavily concentrated in detached houses and its cities have a relatively low density compared with those in other industrialized economies (RBA 2014a). The increase in apartment construction has driven new housing construction to a historically high level and made a strong contribution to economic growth (Graph 2). Differences between the construction processes for Apartments and Detached houses This is important to consider in the analysis of the housing sector and related macroeconomic variables. This includes the pipeline of dwelling investment, the measurement of housing turnover and price inflation.

Although residential construction accounts for a relatively small share of economic activity, it greatly affects overall developments in the Australian economy. This is because new dwelling investment is volatile, and it has strong links with spending on household goods. In addition, dwelling investment is relatively sensitive to changes in interest rates compared with other parts of the economy. As such, the longer development timelines for apartment projects have implications for the lags between changes in interest rates and activity.

The relative importance of supply-side issues, such as land availability and planning processes, also differs between houses and apartments. In addition, the two types of dwellings use different materials and supply chains which have implications for our assessment of cost pressures and final prices (which ultimately feed through to the consumer price index (CPI). Dwellings approved for construction in Australia can be broken down into two broad categories (as defined by the Australian Bureau of Statistics (ABS)):

‘High-rise’ apartments have accounted for much of the increase in residential building approvals since the start of the decade (‘high-rise’ is defined as projects that are four storeys or greater; Graph 3).

Approvals for detached houses have increased from their trough in 2012 to be around their average of the past three decades. 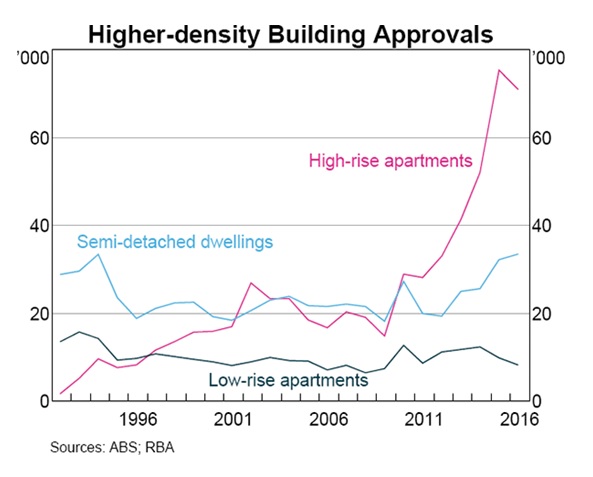 Building approvals for apartments have been highly concentrated in large cities – the capital cities accounted for 90 per cent of apartment approvals in 2016, of which most were in Sydney, Melbourne and Brisbane (Graph 4).

By comparison, approvals for detached houses have been more geographically dispersed, with around two-thirds of approvals last year located in the capitals and less than half in the eastern seaboard capitals. In the major cities, apartments have been mostly constructed in inner (and, to a lesser extent, middle) suburbs, which are well connected with employment centres and amenities. However, the concentration has varied somewhat by city (Graph 5). In contrast, new house construction has largely been located infringe or outer suburbs of cities where land is more readily available. 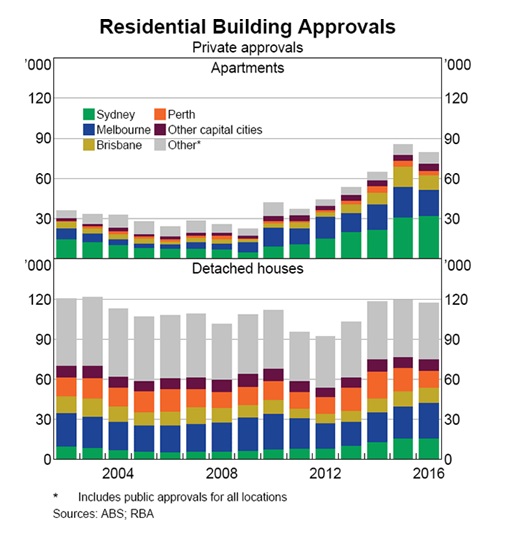 Determinants of demand for different dwelling types include affordability, location and buyer types and preferences, alongside macroeconomic determinants such as population and employment growth. 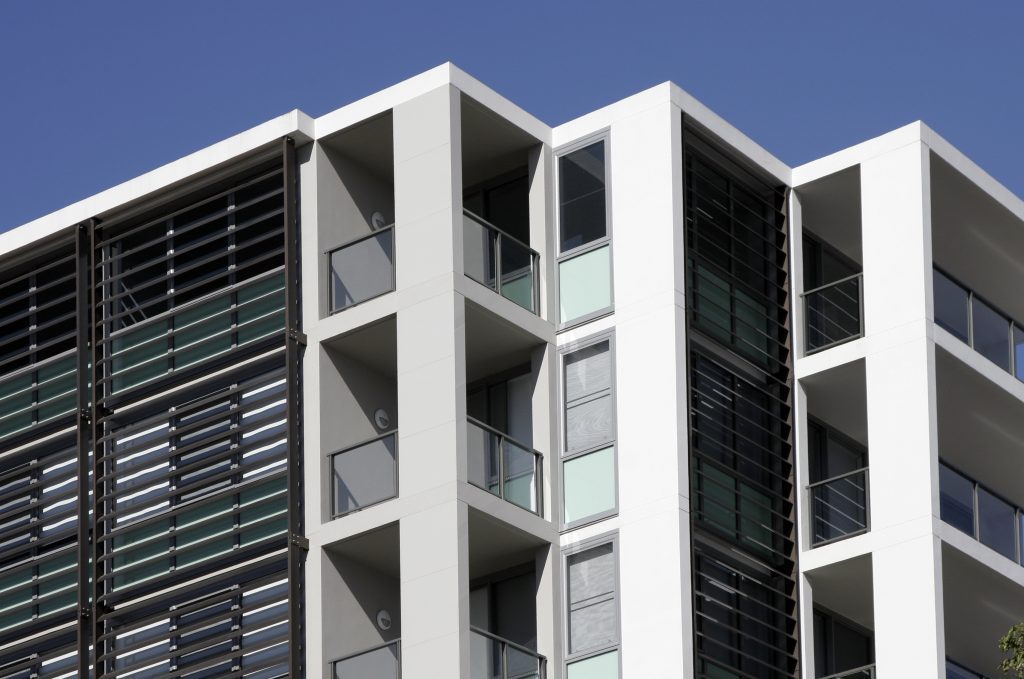 In recent years, lower relative prices have supported the demand for apartments as land supply constraints in the eastern cities have led to significant land price inflation (the supply of land for detached houses is ultimately more limited relative to that for higher-density dwellings), most notably in Sydney. 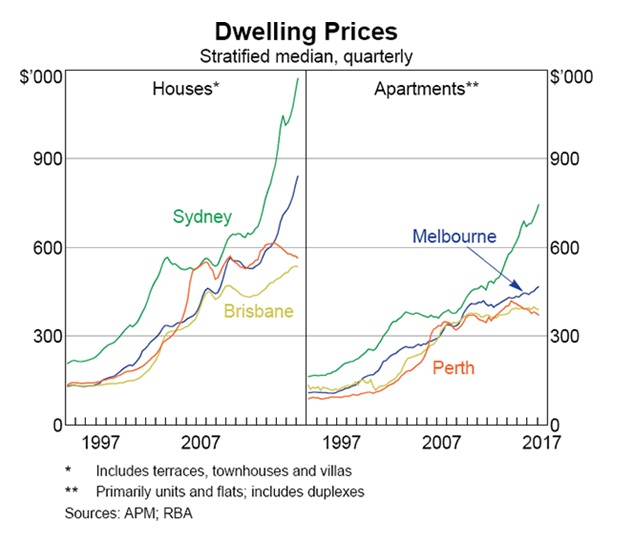 The desire to reside close to major employment centres and transport links is likely to have increased in larger cities where travel times have lengthened. Demographic factors and household formation also matter – larger households are more likely to want larger dwellings, such as houses. In comparison, smaller households, such as single adults and older ‘downsizers’, may prefer apartments. 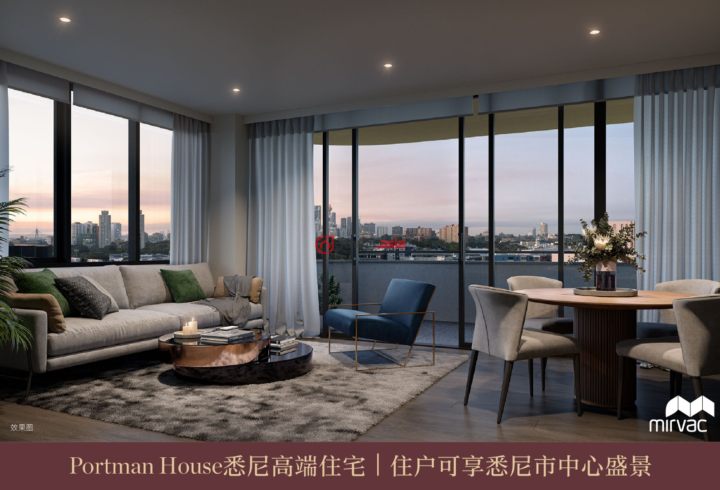 There are three broad types of buyers for new dwellings –

The prominence of these buyer types differs for houses and apartments and can also vary by location (particularly for apartments) (Shoory 2016).

Information from the Bank's liaison program suggests that, in recent years, domestic investors and foreign buyers have generally been much more prominent in purchasing new apartments than they have been for new houses.

Demand from these buyers has partly driven the shift towards apartment construction and is likely to have led to an increase in the net supply in rental apartments. Rental yields for apartments are higher than those for houses (Graph 7).

Foreign buyers are also likely to be more familiar with apartment-style living. Many international cities have a high share of apartments and prefer locations in more convenient inner-city areas or near existing communities.

In contrast, owner-occupiers reportedly account for most new detached home purchases, partly reflecting demographic factors and household size. The net effect of these purchases on the housing supply will depend on the location and size of the existing property the purchaser is moving from and whether there is a change in the rate of household formation. 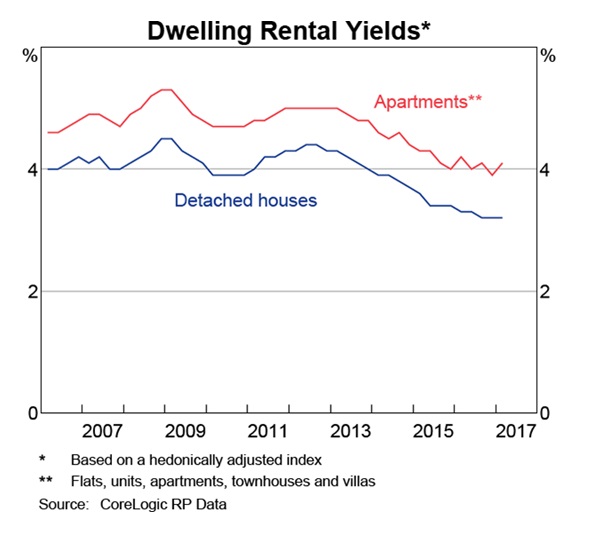 There are differences in the labour and material inputs used in the construction of houses compared with apartments.

These differences and the composition of the new dwellings being constructed have potentially important implications for assessing cost and price inflation in the economy. The Bank's liaison with industry participants suggests that labour and materials each account for around half the construction cost for both apartments and houses.

Nevertheless, there are some differences in the types of labour and materials used.

For instance, apartment construction typically involves a higher proportion of steel, concrete and glass relative to detached houses, while the latter requires a larger share of timber and bricks. 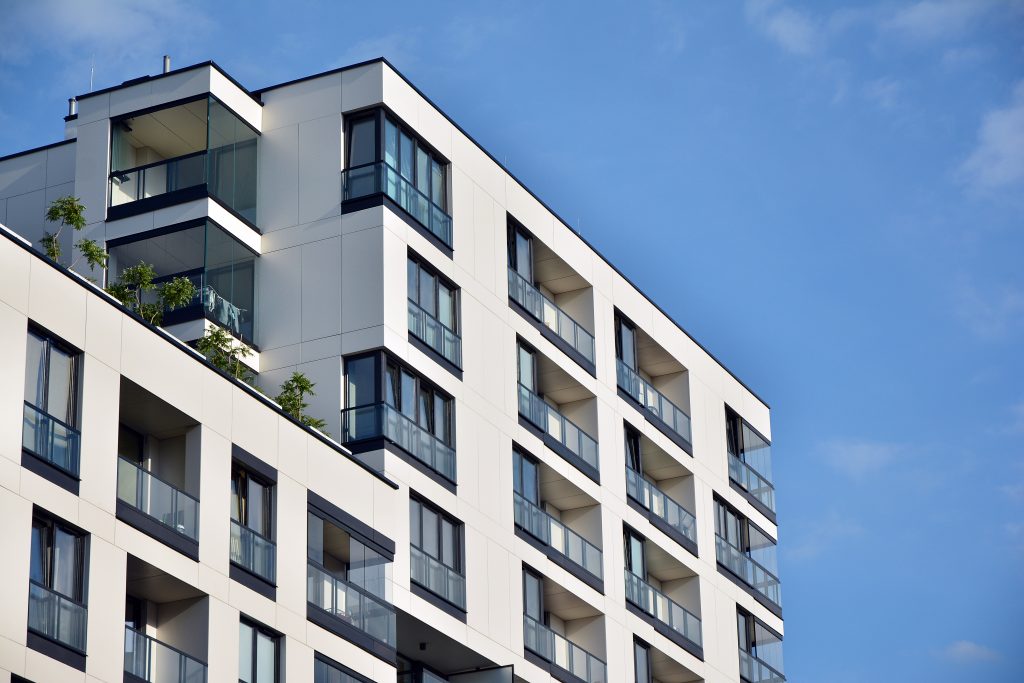 The labour requirements also differ, including in the trades and professions required for construction and labour organisation (particularly in the larger cities). Bricklayers, for example, are commonly required in building houses but not for high-rise apartment projects.[9] A substantial share of labour costs for detached houses is accounted for by subcontractors who are often sole traders. By contrast, labour for high-rise apartment and office construction sites, at least in the eastern states, tends to be attached to large companies with significant workforces.

Over time, trends in construction costs have differed (sometimes considerably) for houses and apartments, in part due to differences in the construction supply chain. For much of the past five years, the cost of building detached houses has grown more quickly than the cost of higher-density dwellings (including apartments) (Graph 9). The slower growth in apartment building costs could reflect a range of factors, including larger productivity improvements and spare capacity in constructing office property, which uses similar materials and labour inputs to apartments. Earlier in the 2000s, apartment construction costs were more volatile than detached costs. 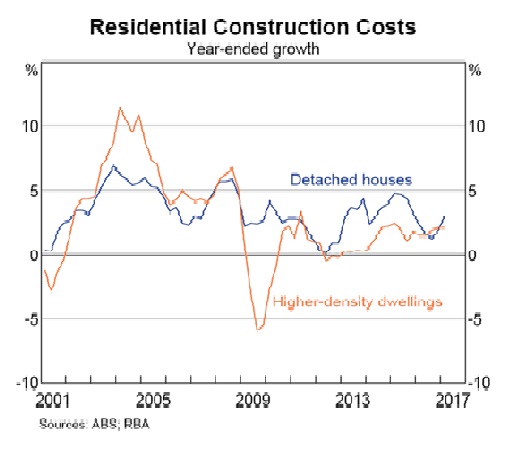 These cost and price dynamics are particularly relevant for consumer price inflation, given the large weight (9 per cent) for ‘new dwelling costs’ in the CPI. New dwelling costs were measured as the construction cost for a new detached house until December quarter 2016, but from the March quarter 2017, the CPI also included costs for apartments in the new dwelling cost series (ABS 2017a). This change in measurement is an important consideration, given the historical differences in cost growth for these dwelling types and the increased share of new dwellings accounted for by apartments in recent years (apartments account for about one-fifth of new dwelling costs). There can also be substantial differences in the rate of apartment cost inflation by city (Graph 10). Nevertheless, the near-term effect on the national index is expected to be limited as the current rate of inflation in each component is similar. 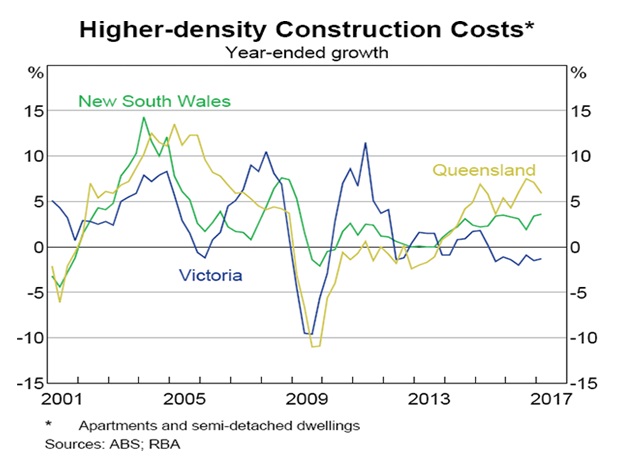 House prices in all Australian cities, apart from Hobart, have fallen or made very modest gains over the past 12 months. Sydney and Perth are the two cities experiencing the largest declines.

Property in Australia is still the most expensive in Sydney. 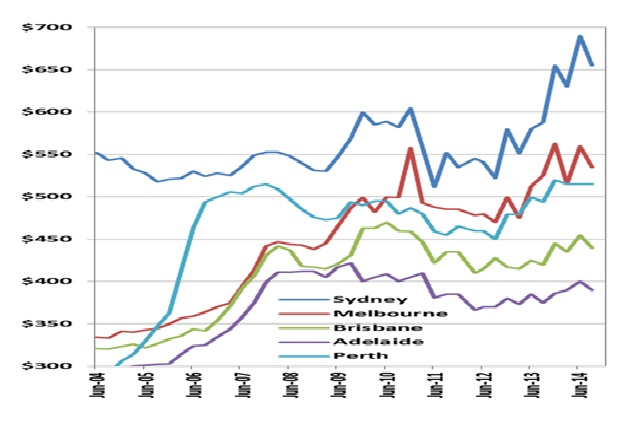 The growing share of apartments in Australia's housing mix has a wide range of implications for analysing dwelling investment, housing markets and price inflation. The response of the housing sector to changes in interest rates and government policies is also likely to have changed.

In particular, the longer and lumpier construction timelines for apartments mean the full influence of policy changes may take many years to be realized. The increase in apartment construction activity is a relatively recent development. So the understanding of these implications may evolve, particularly after a full cycle of activity is observed.

Thinking of buying or investing in Australian property?

Please leave your details below, and our seasoned agents will assist you with all your property-related needs!

A Cross-border Buyer’s Guide for Malaysia

9 Provinces in Canada Perfect for Asians to Live In