How will HS2 impact on house prices in Manchester? 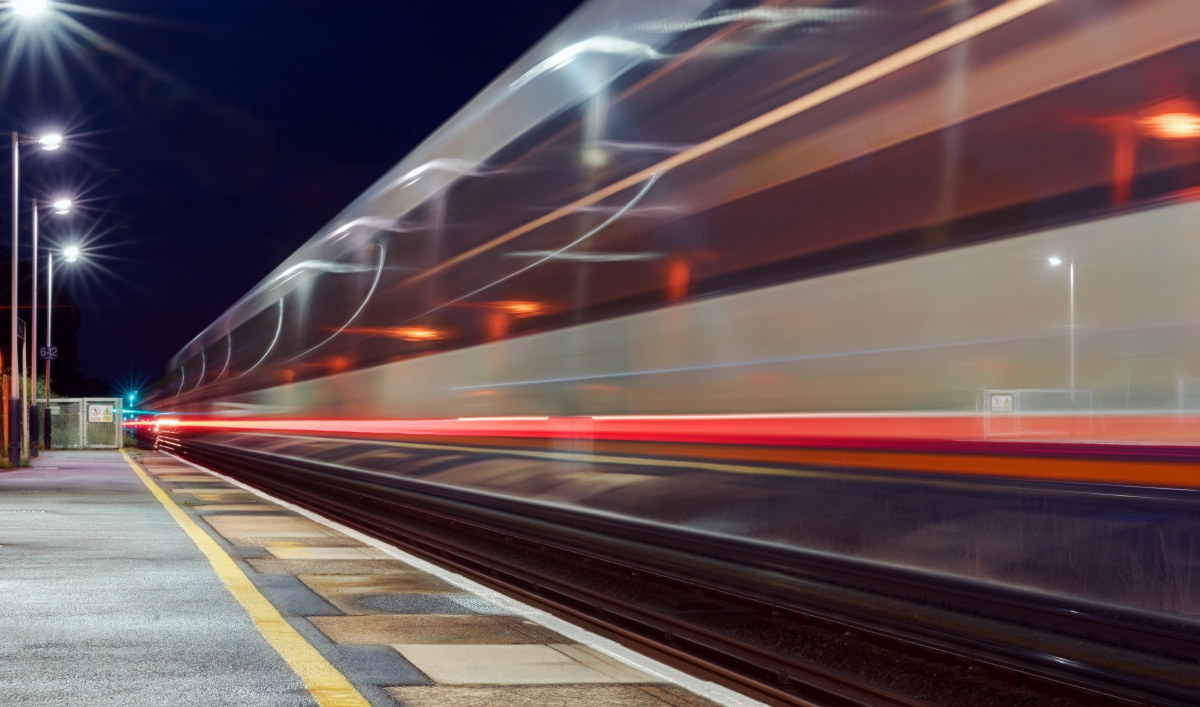 After a series of delays and budget changes, High-Speed Two (HS2) rail link construction is now officially underway. The £106 billion rail network is currently the largest infrastructure project in Europe. It will have a significant impact up and down the UK. House prices of the areas HS2 passes through will be affected over the coming years – to some extent, this impact is already noticeable. So how could it affect property investment?

Want to cash in on the HS2 developments? Click here

HS2 is a new high-speed railway linking up London, the Midlands, the North and Scotland serving over 25 stations, including eight of Britain’s ten largest cities and connecting around 30 million people, which is almost half of the UK’s population. When fully operational, it will transport 300,000 passengers a day, or 100 million each year.

This state-of-the-art rail line is considered critical for the country’s low carbon transport future. It will provide highly-demanded rail capacity across the country, and is integral to rail projects in the North and Midlands – helping rebalance the British economy. It could be that HS2 boosts house prices across the North.

Where will HS2 go?

The construction of the new railway splits into three phases. 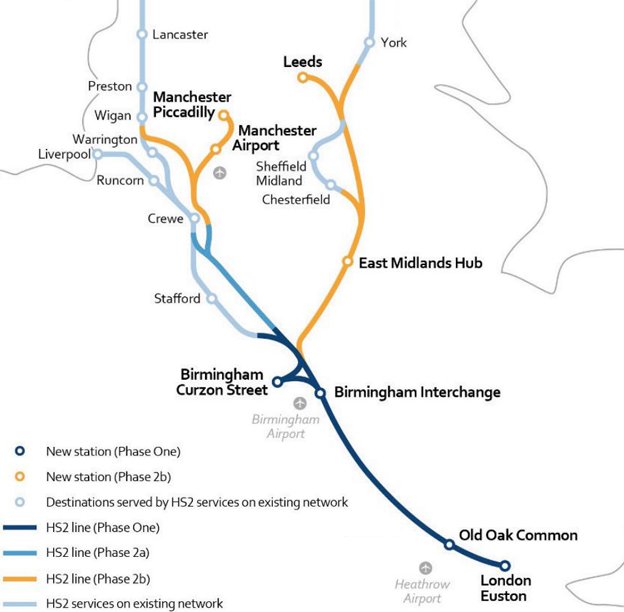 Phase One of HS2 will see a new high-speed railway line constructed from Euston, London to the north of Birmingham, where it will re-join the existing West Coast Mainline. Stations along this stretch are scheduled for Old Oak Common, to provide a link to Paddington, Crossrail, the Heathrow Express and possibly the London Underground, too. Phase One will open between 2029 and 2033.

Phase Two takes the line into two sections. The Phase 2a line will run between Fradley in the West Midlands and Crewe in Cheshire, where it will connect with existing high-speed services to carry passengers between London and Crewe. The Phase 2b line forms a Y shape, split into an eastern and a western leg. The western leg will connect to the high-speed lines at Crewe and run through to Manchester. The eastern leg will connect to high-speed lines in the West Midlands and run through to Leeds. Phase Two is due for completion in stages, all complete by 2035 - 2040. There will then be other lines off to Liverpool, Newcastle and Scotland in later years. 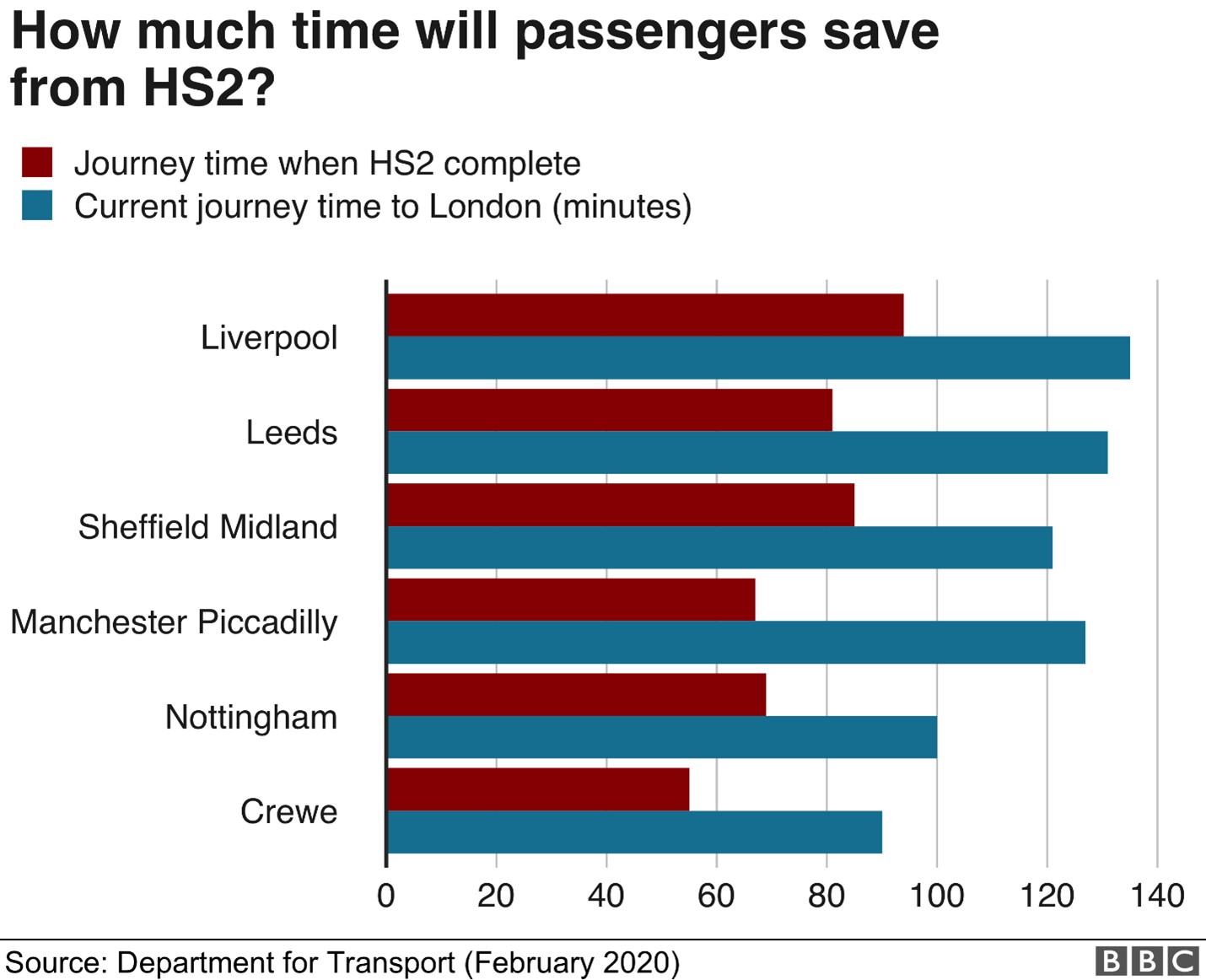 How the HS2 project will affect house prices will depend on the location of the property to the new route. Ultimately, any major upgrades to transport in an area are likely to boost its attractiveness to prospective investors and residents, and this consequently will push up house prices.

Extensive impacts have already been seen just from the promise of the future railway line. In Birmingham, several major regeneration and property investment projects are currently underway. Many investors have cited HS2 as part of their motivation for backing these projects. ‘HS2 Effect’ has driven a 14% house price rise in just two years, according to Knight Frank. Those who invest now are expecting substantial price appreciation over the coming years as HS2 comes to fruition.

Crossrail in London is an excellent example of how past infrastructure projects have affected house prices. Even through the financial crisis, properties along the line had already doubled in value since 2008 and could grow by a further 4.7% until 2021. According to the Guardian, properties within a 10 to 15-minute walk of stations along the Crossrail line could see house prices soar by between 30% and 60% over the construction period.

On the flip side, properties that are very close to the new line could see value depreciation, according to Property Road. It reveals homes within 500m of the line could see house prices harmed in the short-term due to the disruptive building works as well as increased traffic levels in the area during construction. This is something to keep in mind when selecting a property close to HS2.

With house prices expected to rise, where are the HS2 property investment opportunities? One of the original contentions for the HS2 scheme was to bridge the gap between the north and south, to create jobs, homes, investments and economic growth in cities but London. The Northern Powerhouse and, in particular, Manchester became one of the core cities for the Northern resurgence, along with Liverpool, Leeds, Newcastle and Sheffield.

In recent years, Manchester has undergone some significant regeneration schemes and is now classed as the UK’s second city, a title formerly held by Birmingham. Home to two of the world’s biggest football clubs, a world top university, and one of the UK’s biggest shopping centres, there’s undoubtedly a massive draw to the city.

Manchester is well-known for being an attractive place to live, with bustling inner-city apartments and countryside, detached homes on offer for a fraction of the price in London. In April of this year, new homeowners had to shell out £163,356 on average for a home, according to figures from the Land Registry. The price tag is a massive appeal for first-time buyers and young professionals.

House prices in Manchester are going up twice as fast as the national average. With an efficient HS2 link, Manchester is witnessing business and property investment, attracting a bigger talent pool and more residents, and this will increase further as we near the start of HS2 services. Additionally, Manchester City Council presents that productivity gains in Greater Manchester value up to £1.3 billion per year, equivalent to a 1.7% increase in total local economic in 2037. Meanwhile, the council has designated six zones in Manchester adjacent to its budding HS2 station, expecting three of which to deliver significant volumes of residential property.

Manchester is a thriving cosmopolitan city which can compete with the biggest cities in the world. With the promise of better accessibility (reducing the journey time from London to 1 hour and 8 minutes – a saving of one hour), house prices are expected to rise in the region as more people come to live and work. For property investors and homebuyers alike, the sooner you invest in the city, the more likely you are to gain from house prices growth as the HS2 project progresses.

Juwai.asia offers you a wide range of properties in Manchester. Sign up so we can keep you up to date with our projects close to the new HS2 line.

I want to know more about HS2 projects in Manchester.

6 Good Reasons to buy an Off Plan Property in Australia